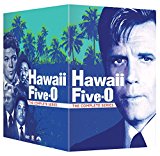 I’ve never been to Hawaii, alas, but if I ever did I kind of wish that, somehow, it would resemble the Hawaii of Hawaii Five-O, the 1968-1980 cop series starring Jack Lord. At the time of its cancellation it had been the longest-running police procedural show in TV history. It was innovative, unique, and at its best enormous fun. It had production values and a style that resembled big budget movies of the period, while Lord and his supporting cast, the initial line-up especially, not to mention catch phrases like “Book em, Danno” and those amazing opening titles (music by Morton Stevens and designed by Iranian-born Reza Radiyi), still the best credits sequence of any show before or since, made the series unforgettable. Audiences only familiar with the present day Hawaii Five-0 (zero instead of an “O”) are really missing out.